By timeofthetech June 03, 2011
Recently, I got an e-mail from HTC asking me to call them back since I was dissatisfied with my customer service experience after my Nexus One phone died on me. HTC even gave me a name to ask for.

So I called today and I am even more disappointed with them. The HTC employee did not seem to give a $#*% in the world that I was rightfully unhappy. She pretty much told me the warranty "is what it is".

I tried to argue that the power button issue on my Nexus One is a known issue. As a known issue HTC should recall the phones or at least offer free fixes. Keep in mind two things, I was not looking for a hand out. I have already cancelled my phone contract and my phone is on its way to Mexico for one of my cousins to use (he knows people).

I still respect the quality of most HTC products, but this is a bad juju point on their record. 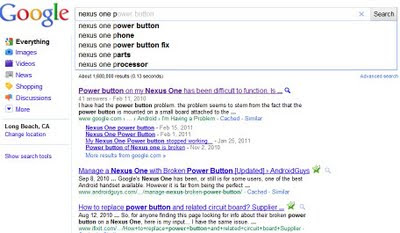 Paulina said…
I was looking at these type of phones and notice some say 1 GHz snapdragon processor and some say 1GHz hummingbird processor... what's the difference?
June 8, 2011 at 9:53 PM