Showing posts from February, 2011
Show all

The Itch for Netflix

Ever since I got my own place, I felt like three was an emptiness. In the soul of my apartment was an abyss created by the lack of Netflix. Recently, I was able to save up money to buy a product that could stream Netflix onto my TV.* As always, I explored all options with as much objectivity as my rationale could afford. Here were the challengers: Google TV:  $300/$400. Gorgeous user interface, replaces the HDMI output of your TV feed. $400 dollar box has Blu-ray.  Blue-ray Player with Built in Wi-fi:  ~$180. Self explanatory. Roku:  $60/$80/$100. Need $80 dollar box and above for 1080p resolution. Apple TV:  $100. Syncs to iTunes.   Xbox:  $200/$300/$400. $400 dollar Xbox comes with the revolutionary Kinect system. To stream Netflix, a $50/yr Xbox Live fee is required. PS3:  $300/$400. Comes with Blu-ray. Wii:  $200. Plays Wii game. Wii motion system has become outdated by the Kinect. Some systems had Blu-ray, which is something I coveted: Google TV. Blu-ray player with
5 comments
Read more

About two weeks ago, I received what could be the worst news any Xbox owner could receive. I was playing a game when all of a sudden the screen froze. I looked at the Xbox and lo and behold, I saw three red lights blinking at me... taunting me and telling me, "this is the end for you". Now we've had this console for almost 3 years now and we didn't get the extended warranty from Costco. I was freaking out! I searched all over the web for any solution to the Red Ring of Death (RRoD); blogs and Youtube videos all testing the urban legend of the wet towel trick. All the reviews I read of the wet towel trick absolutely debunk the solution by the way. It basically overheats the system and resets the computer (not to mention the fire hazard). This was a temporary solution as the RRoD would come back after a while anyway. Now I didn't want to spend any money buying a DIY repair guide and I didn't want to risk burning my apartment down. So I went to the Xbox Custo
Post a Comment
Read more

From Android to iPhone?

In late August of this year my T-mobile contract will expire. I signed with T-mobile back in October of 2008.  My math is a bit rusty, but that sounds like a three year plan. Regardless... I will be a free agent! I will diligently look for the best phone, which includes exploring every option. One option is the iPhone 5, which should be out by then. It sounds odd for an Android disciple like me to even think of getting an iPhone. I've had the first Android phone, the G1. I've had the second Android phone, the MyTouch. I have the first "Google Phone", the Nexus One. I'm constantly spewing praises for Android, as if I were being paid. But even I know that the iPhone is a damn good phone. And with the iPhone 5 certain barriers to entry, could be taken down, they include: AT&T is no longer the only carrier. Bonus points if the iPhone can make it to T-mobile. The iPhone 5 is rumored to have a 4" screen.  All iPhones have 3.5" screens, which is the sm
Post a Comment
Read more

So you think you are the only one getting dropped calls from AT&T?  Or you are the only one that gets shady customer care from AT&T.  Obviously, you're not alone. It's refreshing to know that even billionaires get hosed by AT&T. Check out the video to see what the teddy-bear-like Apple co-founder had to say about his AT&T experiences.  Skip to the 1:00 minute mark if you want to save time:
Post a Comment
Read more

It Shall Come To Pass, Machines vs Humans

Last night Watson debuted on Jeopardy. For those of you that don't know, Watson is a computer from IBM. He* took seven years and thousands of man hours to create. He was created to be able to play Jeopardy. He can't see or hear, all his information is given to him electronically. See the videos below to learn more about him. Intro on Watson for the nerdier people: Intro on Watson for the common-folk: My first reaction to Watson is, "holy #&@*!" That's a lot of computing power just to play Jeopardy. Makes you wonder how amazing the human brain is. Then I ponder a little more and wonder about how Watson works. Does Watson think? If Watson thinks, how close is he to being sentient? How close are humans to creating a sentient machine? The father of modern philosophy, Rene Descartes, proved his mind existed with the phrase "I think, therefore I am". ** So for the sake of not arguing, let's assume that machines will think like us and by Descart
Post a Comment
Read more

When I was living with my old roommates, we used Direct TV and Time Warner Cable to satisfy our TV cravings. While I hated, hate, and will always hate Direct TV for their barbaric two year contracts, I give them credit for having a neat looking user interface (UI). But because of their two year contract and lies, we cancelled. We paid about $400 dollars to get Direct TV's grubby paws out of our living room. At that point, it wasn't about the money, it was about principles. And so a happier relationship was started with Time Warner Cable. Though a lot of things were better with Time Warner Cable, I couldn't help but notice their cable boxes' UI was "fugly". Little did I know... Recently, I've moved away from the parents  old roommates. The new area I'm in is serviced by Charter Cable. I was shocked by the UI of the Charter cable boxes.  See picture below: The UI of the Charter cable box made Time Warner Cable's UI look like it was from the year
4 comments
Read more

The Internet Just Ran Out of Numbers

By timeofthetech February 09, 2011
Technology Review by Bobbie Johnson : "On February 3 [2011], it finally happened: the clock ran out on the Internet as we know it. That was the day that the stash of Internet protocol addresses that are used to identify and locate computers connected to the Internet— the telephone numbers of the online world —was exhausted." According to the Technology Review the current system for IP addresses, IPv4, uses numeric addresses that are 32 bit long. Which gives a total possible combination of 4 billion IP address. So with 7 billion people on this planet it's reasonable to believe we've ran out IP addresses. But don't worry. IPv6 is here with 48,000,000,000,000,000,000,000,000,000 IP address combination per person on this planet. We can't really blame the IPv4 people for their lack of foresight since they created IPv4 in 1981, when the Earth's population was much smaller, they even created IPv6 in 1986 well before the internet went public. However, the ISPs (
Post a Comment
Read more

February Tech of the Month

Hi everyone! So this month's tech of the month ties in a little bit with the Xbox Kinect post and we'll discuss the future of interfacing with your gadgets. Now I'm sure most of you have already seen Mr. Scientology himself Tom Cruise in the movie Minority Report. The premise of the movie is a super computer (spoiler alert) solving crimes before they actually happen. Now as much as I love TC (Tom Cruise), I'm here to talk about that badass computer he was messing around with. If you think that was all sci-fi and extremely futuristic, watch this video... g-speak overview 1828121108 from john underkoffler on Vimeo . The technology featured on the futuristic movie is actually a fully functional system that's available today. One of the more intriguing applications I can think of is surgery using robotics and this system. Imagine having accessibility to the best surgeons in the world at your local hospital. Local specialists at your operating table and robots bein
Post a Comment
Read more

Technology makes us lazier. But did you know certain technologies can give us "courage", "invincibility" and make us believe we're good dancers? You guessed it, we're talking about technology that aids us in the consumption of beer. Check out the new bottom filling dispenser from BottomsUp Beer . Their current record is 56 beers poured in one minute! At the moment the BottomsUp dispenser is only available to commercial clients. Home units will not be ready until 2013. However, if you subscribe on the BottomsUp Beer webpage, you might have the ability to purchase a home unit prior to 2013. Despite the coolness of this product and people's affinity for beer, I don't see many people buying these units. Perhaps renting these units would be a better solution. Realistically, how often do we throw parties that would benefit from the use of this magical dispenser? We're not all living in fraternity houses.
Post a Comment
Read more

So I recently bought the Xbox 360 Kinect which identifies YOU as the controller and no longer requires the use of game controllers. When I first saw the ads for these a couple of years ago, I was completely blown away. Watch this video... Now for a long time Nintendo fanatic like myself (no joke, I've got the Wii, Gamecube, 64, Super, Regular, and FamCom), this was pretty breath taking. The wireless age is about to go to the next level in gaming. No more balance boards or remote controls to make your way through an obstacle course or yoga position. You have full control of your character... whether or not you're coordinated enough to maneuver your character is another story. I've owned the Wii for a long time now and the Kinect absolutely blows the crap out of the Wii system. I'll have to admit, the Kinect is still a few more years before it ever gets to the sensitivity that Natal Project boasts but this is pretty darn close. It captures almost all of your movements
Post a Comment
Read more 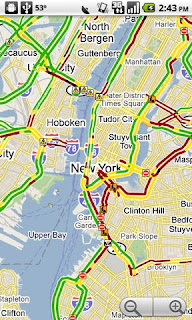 Not long ago I was left without a smartphone for a week. The power button on my beloved Nexus One decide to stop working, so I sent the phone out to get repaired. What's worse is that I didn't have a back up "cheappy" phone. Old fashioned methods of communication came to the rescue, Google Talk to chat and Yahoo Mail to send texts. During that dark week, certain application on my phone were badly missed. Top five android applications that were missed: Google Maps.  Searching for the nearest gas station, looking at traffic. Most importantly, the free turn-by-turn navigation . Google maps is available on other mobile operating systems, however, the free-turn by turn navigation is a Google Android exclusive. News and Weather. Every morning before I wake up I'm used to checking the weather on this stock Android application. The news section is a great cross section of national and international news sources. This application is perfect for those times when you&
Post a Comment
Read more 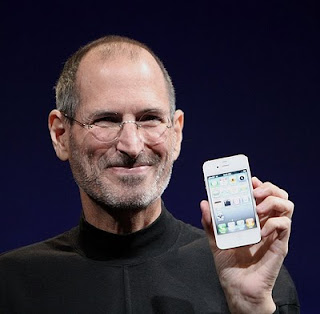 Call me weird, but when I buy a product, I take into account the reputation of the company. Does the company pay its employees well (not you Wal-Mart), does the company support X candidate or Y proposition, how is the CEO like?  So every now and then,  Time of the Tech will post CEO profiles to further enlighten you, the consumer, about the details of the head of a company.  Apple Inc., CEO: Name:  Steven Paul Jobs DOB:  February 24, 1955 (55 Years Old), Pisces Education:  Reed College, dropped out* after one semester. Memorable Quote: "I wish developing great products was as easy as writing a check. If that was the case, Microsoft would have great products." - May 2007 Other Endevours:  Co-founded Pixar, after merging with Disney Studios, Mr. Jobs is now on the Disney board of directors. Interesting Fact:  According to Forbes magazine (August 2010 edition), Mr. Jobs is worth $6.1 billion.  Also, people can e-mail Mr. Jobs, sjobs@apple.com, and he'll someti
Post a Comment
Read more
More posts