A New Era in Music: Spotify 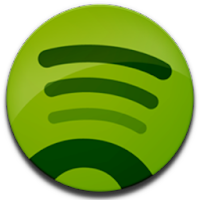 I am proud to say that I grew up during the twilight years of the Physical Music Age. I remember my first album, it was the Dangerous cassette by Michael Jackson. The first CD I ever owned was also from Michael Jackson, the History album.

Then came Napster. Napster brought us into the Open Digital Age. The original Napster allowed us to freely "share" music with anyone on the web. The more people that were on Napster, the more music we had access too. In essence, we had access to all music for free. However, as fast as Napster rose, so was its decline. The music industry/ Metallica struck hard at Napster with lawsuits. Out of the ashes came Morpheus, but that was struck down by the music industry/ Metallica. Then Kazaa rose, but that was also struck down. Kazaa was the last great massively used program to download music for free. There are other programs like BearShare and Limewire, but they never had a music library with the scope of the aforementioned programs.

So in a beaten state, when we were crawling and hungry for music, we transitioned into the Paid Digital Age. Many flocked to iTunes because it was the only gateway to the their beloved iPods. Some decided to stream random songs related to their favorite artist/song/genre via Pandora. But whatever we tried we were left separated from the God of Music. Our music souls were restless. But our yearnings have been answered, Spotify was sent to us by the Swedes.

If you have not heard of Spotify here is the gist, for the $10 a month premium account you get:

My only gripe about Spotify is that you have to log in with a Facebook account. So I had to use my fiance's account to log in. But that is a minor tarnish. For those of you that love music, Spotify is the way to go.

I would like to give thanks to Bryan and Zhi for introducing me to this new service.