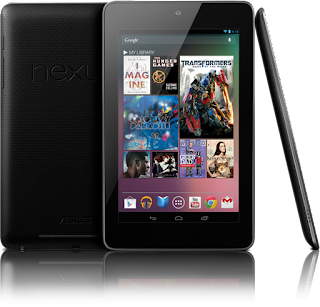 First off, let me give credit to whom it is due. I have gloriously modeled (or blatantly copied) the design of this blog entry, "three thoughts on ...", from Sports Illustrated writer Grant Wahl.

Now back to my three thoughts. Google unveiled their first official tablet earlier this week, which is the Nexus 7 tablet. The device will debut for $200 and the hardware is manufactured by Asus.

Thought 1: At 7 inches and $200 this is meant to compete with the Amazon Kindle Fire which is also 7 inches and $200. Amazon, Google, Apple, and Microsoft are all staking claims into different segments of the tablet market. Amazon and Google are competing for the smaller screen, E-reader, more affordable sector. Apple is dominating the higher end tablet sector. And the upcoming Microsoft Surface is vying for the tablet/netbook sector.

Thought 2: The Nexus 7 will be a perfect device for anyone looking for an E-reader that can also function as a web browser. The Nexus 7 is clearly a better tablet than the Kindle Fire. I am interested to see what Amazon is going to announce in the coming months, because they will be announcing a new Kindle Fire. But if you cannot wait until this Fall for a new Kindle Fire, then you should be happy spending $200 on the Nexus 7 tablet.

Thought 3: The Nexus 7 will debut with Android 4.1, "Jelly Bean". The best part of the Jelly Bean operating system is the Google Now application which incorporates your location and suggestions very well. Siri who?