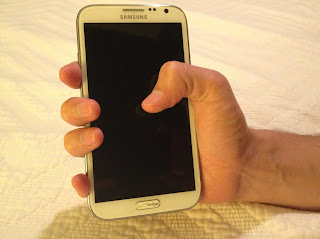 The last weeks have been a whirlwind. After patiently waiting for the Samsung Galaxy Note II to come out on Verizon for three months, I snapped. On Friday, November 23, 2012, which is also known as "Black Friday", I bought the HTC Droid DNA.

Why would I buy the HTC Droid, if I wanted the Galaxy Note II? Two good reasons at the time. One, I wanted a large screen, the Droid DNA has a large 5 inch display with a stunning 441 pixels per inch. Two, I knew that the Galaxy Note II was coming out in less than a week, so if I had buyer's remorse, I could "easily" exchange the Droid DNA.

Since the horrible exchange experience I suffered through is not the topic of this story, I will quickly summarize it:

I will never buy something again, if I have a suspicion that I will return it. It is not worth it. I will say that the Droid DNA was a beautiful phone, but I was set on a phone with a 5.55 inch screen, which happened to be the Galaxy Note II.


So, how does it feel to go back to Android after having the iPhone 4S for thirteen months? At first, I wondered if I made the wrong choice by leaving Apple's iOS. In order, here is what Apple does better:
Wow, after making that list, I wonder why I even switched out of the iPhone. But, the most important factor for me was size. To me, size is currently the most significant difference between an iPhone and an Android. If you enjoy working out with your phone, you will enjoy the size of the iPhones. But my biggest use for my smartphone was not a camera or a music player or even a phone, it was as an e-reader. I wanted the biggest phone possible that I could still put into my pocket. The Galaxy Note II is that perfect phone for me.

After two weeks of using the Galaxy Note II, I can say to all those people that wanted this big phone, go for it, you will not be disappointed. The only thing I would caution those people is to prepare themselves for the jealous stares of "haters" that out loud call your phone too big. These haters will mimic your phone calls by picking up a tablet and putting it to their ear. But in silence, they are crying out and longing for the Samsung Galaxy Note II.
Android Apple comparison Droid DNA Google iPhone 4S Samsung Galaxy Note II smartphone