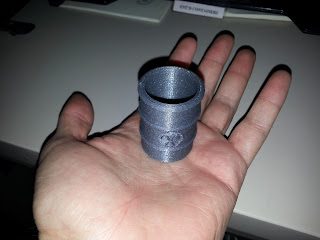 Several months ago, my sole daily reader, co-worker, and friend- Matthew- showed me a small green plastic airplane. The green plastic airplane was no bigger than three inches from nose to rudder. He told me that the airplane was created from a 3-D printer. At first, I did not believe him. But then I used some logic, if humans have fission energy, made it to the moon, and created iPhones, then why not 3-D printers? Never doubt the ingenuity of humans. If we can imagine something, it will be a possibility one day.

After my internal monologue, which happened in less than three seconds, I must have responded to Matthew with a calm, "Cool". And indeed the 3-D airplane was cool. Some weeks passed by, then Matthew brings me a 3-D printed barrel, pictured above. I begin to ask more questions about this printer. Apparently, the printer is custom made. The limitations of this printer are a length and width of a few inches, the height being more flexible. This particular printer only prints in gray and green. However, the maximum dimensions of printed objects, color, and type of ink can all vary depending on the type of 3-D printer.

I wondered how in the future we could make toys and utensils for our households. Little did I know about what was to come...

In the last several months, we have had someone create a gun from a 3-D printer and successfully fire it! This person even shared the plans with the world, well that is until the US government decided that was not lawful.

Then there are the medical applications for 3-D printing, which seem endless. Click here for an article on five future medical uses.

Unknown said…
Amazing article. Extremely intriguing to peruse. I truly love to peruse such a decent article. Much appreciated! continue shaking.
prints near me